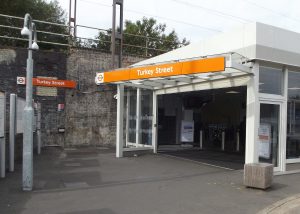 Arriva Rail London (ARL) wants to close 51 ticket offices across London in total, including those at Bush Hill Park, Silver Street, Southbury, and Turkey Street. The plans are backed by Transport for London (TfL), which runs London Overground services.

Phil Ridley, from Enfield Transport User Group, argues the decision does not account for future increases in passenger numbers. He said: “Tens of thousands of new homes are planned for Tottenham and Enfield, with passenger numbers more than doubling and no signs of abatement. We run the risk of closing ticket offices that fail TfL’s arbitrary busyness targets that, in a few years, may meet the standard they fail today.

“There could be a distinction made between peak and off-peak. Many of our ticket offices may fail to satisfy the TfL requirement on average, yet hit that target in the morning peak. Why not be sophisticated and have those offices as peak hours only, so we retain the infrastructure?”

TfL states that ARL’s proposals will “not compromise safety” and include “making staff more visible, providing assistance where it is most needed, and modernising the process for selling tickets”. Only ticket offices that sell less than twelve tickets per hour are affected.

Arthur Leathley, chair of London TravelWatch, said: “We want to ensure passengers can still purchase the tickets that they need after these proposed changes.”

Views given in a public consultation last month will be considered before a final decision is taken.